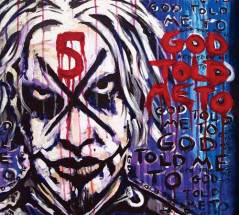 JOHN 5 is absolutely one of the best and most underrated guitarists in the world today! I’ve been a huge fan of John’s since his MARILYN MANSON days. Now with ROB ZOMBIE, JOHN 5 is an incredible musician and a master of arrangement! God Told Me To is filled with just about every style of guitar playing you can name…from straight up shredding to acoustic steel string with a country/blues flair to finger style to Flamenco. If you can’t find something to love on this album, you ain’t a music fan!!! It’s my opinion that JOHN 5 should be a household name…and it’s a travesty that he isn’t! John is technically and musically, truly one of the best guitarists in the industry today. God Told Me To is John’s sixth solo record. Simply…it’s absolutely incredible! Favorite tunes include “Killafornia”, “The Castle”, “Creepy Crawler” and “The Lie You Live”(even though these names imply something dark, these songs are absolutely beautiful!), and a kick-ass all-electric version of Michael Jackson’s “Beat It!”  Truthfully, they’re all awesome! END_OF_DOCUMENT_TOKEN_TO_BE_REPLACED