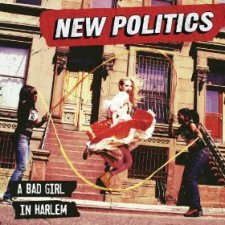 A Bad Girl In Harlem cd

All you want is a funky rock ‘n roller?  Look no further…New Politics is all you need!  The alternative/rock/pop trio from Copenhagen, Denmark might be few in members, but it is HUGE in sound!  They are definitely one of my favorite current bands and I was so excited for the release of their second album, A Bad Girl In Harlem.  It may not be as raw as the first self-titled album, but it is filled with catchy hooks and a little something for everyone.  The first single released, “Harlem”, is easily my favorite track on the entire record.  With it’s “My Sharona” drum beats at the beginning and the energy that never lets up, you can’t help but dance and sing the lyrics at the top of your lungs.  From the more poppy tracks like “Fall Into These Arms” and “Tonight You’re Perfect”, to the ballady “Stuck On You”, and the inspirational “Overcome”,  this album offers a little bit of everything.  “Die Together” sounds very Muse-esque and “Just Like Me” is more punk…yes, this album seems to be all over the place, but that’s one of the things I like most about it!  No matter what kinda mood you’re in, they have a song to fit.  Props to the boys, David Boyd, Søren Hansen, and Louis Vecchio, for a solid sophomore album and I know they will be around for a while.  Pick up A Bad Girl In Harlem ASAP, and if you haven’t seen New Politics live, do yourself a favor…their shows are a very high energy, non-stop party, and David’s breakdancing skills are out of this world!  Catch them on tour this summer with Fall Out Boy and Paramore!

CD Review: Fall Out Boy – Save Rock and Roll 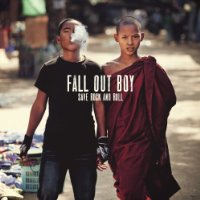 FALL OUT BOY
Save Rock and Roll cd
Island Records

In February 2013, Fall Out Boy announced that the hiatus was over and a new album was coming…and I shamelessly squealed like a school girl.  Fall Out Boy has been my absolute favorite band for the last decade and I had been hoping and praying for this announcement since the hiatus started in 2009.  It was a long wait, but so worth it!  Save Rock and Roll is the best album I have heard in a long time!  I have heard several people complain that this album isn’t “true Fall Out Boy.” While it is completely different from the band’s 4 previous studio albums, it is still FALL OUT BOY!  I think the band has matured and the music has matured with them, and it has just gotten better!  Patrick Stump is still the most amazing vocalist ever (that boy can sing anything and make it sound good!) and you can still find bassist Pete Wentz’s personality in the lyrics.  Joe Trohman’s guitar skills are still awesome and Andy Hurley is still the heart beat of the band.  Combine all of that with the best producer around, the genius that is Butch Walker, and you get musical magic!  The album is still considered pop-punk/rock but it offers so much more than that.  From the soulful, Adele-sounding Just One Yesterday (featuring Foxes), to the more hip-hop sounding The Mighty Fall (featuring Big Sean), there is something for everyone on this album.  If you are alive on the planet, there’s no way you haven’t heard the first single released from the album, My Songs Know What You Did in the Dark (Light ‘Em Up), which has already gone platinum, and it has been followed with the releases of The Phoenix and Alone Together.  Other favorites from the album are Rat a Tat (featuring Courtney Love) and of course, Save Rock and Roll (featuring Sir Elton John…how awesome is that?!).  There are even a couple of nods to some old-school FOB songs in the lyrics, like “I will defend the faith, going down swinging…”  from Save Rock and Roll.  So, while this album isn’t exactly “old FOB”, it is still Fall Out Boy and I am beyond excited that my boys are back and making bad-ass music that makes them happy!  Go pick up the album, you won’t be disappointed! 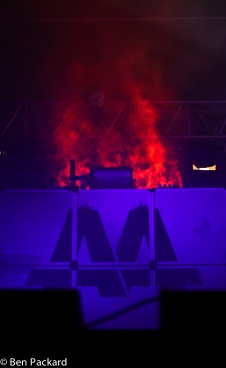 When its the end of December and its 79 degrees out, why wouldn’t you want one of the most anticipated concerts of the year to be outside at an amphitheater in sunny Florida. The latest edition of the Monster Energy Outbreak Tour featured an all-star lineup including Asking Alexandria, As I Lay Dying, Memphis May Fire, I See Stars, and Attila. Suicide Silence was supposed to be a direct support act on this tour, but due to singer Mitch Lucker’s untimely death, I See Stars stepped up to give the fans the they deserved. END_OF_DOCUMENT_TOKEN_TO_BE_REPLACED 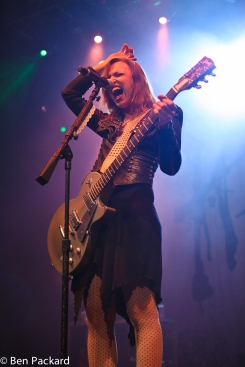 The latest edition of the Jager Music Tour featured female fronted hard rockers Halestorm and In This Moment. The last stop of the tour landed in Orlando Florida at the Hard Rock. Playing to a nearly sold out crowd, the rowdy fans were ready for a night of head banging. After a forgettable opening act, In This Moment took to the stage with high hopes from the crowd. Unfortunately, their set was more performance art than concert, with many awkward silences and pauses while Maria changed costumes or crew members brought out odd props. END_OF_DOCUMENT_TOKEN_TO_BE_REPLACED 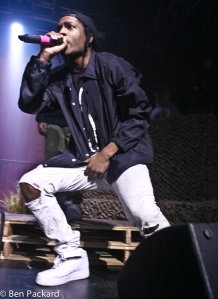 A$AP Rocky recently concluded a nearly 2 month trek around the US on his highly anticipated Long Live A$AP Tour, with special guests SchoolBoy Q and Danny Brown. On one of the final stops in Orlando, the totally sold out crowd formed lines out the door and city blocks long just trying to squeeze in and see the show. Danny Brown got the crowd lit up (pun intended) and ready for School Boy Q. A rather forgettable set by Q left the crowd chanting “A$AP” for nearly 40 minutes while the rapper prepared for his entrance. END_OF_DOCUMENT_TOKEN_TO_BE_REPLACED 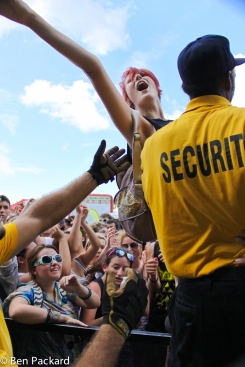 The 18th annual Vans Warped Tour pulled into Vinoy Park in St Pete Florida last week, unloading its own mini city of punk rock madness along the water. Thousands of fans rushed to the entrance as gates were opened an hour before they were supposed to. With an incredibly diverse lineup this year, along with a heavy hitting main stage lineup including ALL TIME LOW, TAKING BACK SUNDAY,  YELLOWCARD, FOUR YEAR STRONG,  FALLING IN REVERSE, PIERCE THE VEIL,  NEW FOUND GLORY, and BREATHE CAROLINA, Warped fans were in for a long, hot sweaty good time. END_OF_DOCUMENT_TOKEN_TO_BE_REPLACED 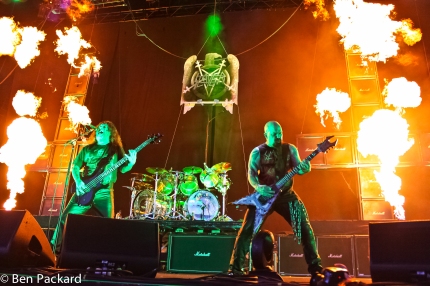 The 2012 version of the Rockstar Mayhem Festival brought out the crowds, both young and old; with bands for every age to head bang to. The festival atmosphere kicked off the day with the Sumerian Stage filled with younger bands, as well as the Jager stage with a killer lineup of Upon A Burning Body, White Chapel, Asking Alexandria, The Devil Wears Prada, and Anthrax. The Metal Mulisha crew was also on hand to throw down some sick aerial stunts for the hyped up crowd. END_OF_DOCUMENT_TOKEN_TO_BE_REPLACED 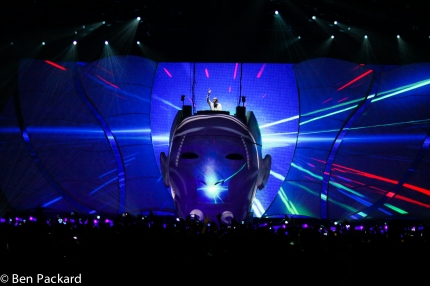 Swedish DJ AVICII kicked off his highly anticipated LE7ELS tour last week at the Tampa Bay Times Forum, raising the bar in the EDM scene. With a massive stage set that blows Skrillex out of the water, AVICII drew thousands of fans out who were ready to party! Tim (Bergling) played over 2 hours of nonstop mixes, sending the crowd into frenzy. An hour and a half into the show, the giant head on stage began to rise, and Avicii flew out over the crowd into the middle of the arena, bringing the party even that much closer to the fans. END_OF_DOCUMENT_TOKEN_TO_BE_REPLACED

The Used and Dead Sara at House Of Blues Orlando 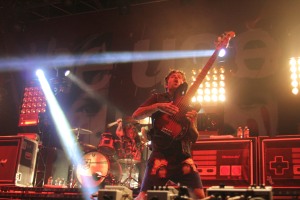 Dead Sara opened up the show for headlining band, The Used, in Orlando on May 27th as apart of The Used headlining tour promoting their newest release, Vulnerable. I have never head of Dead Sara before, and when sound checking, the four piece band made up of two female guitarists, Emily Armstrong, who is also the vocalist, Siouxsie Medley, Sean Friday on drums and Chris Null playing bass.  It was a different combination for the music scene today, but let me tell you, it worked, and it worked well.  If I had to describe Dead Sara’s sound, it was a mix between old Paramore with a southern twist to it. On their first song, “Test On My Patience”, lights were low, sound was soft, and the crowd didn’t really expect much of anything, they were just excited for The Used to play right after them, but the beat got faster, the intensity was building, and when the lights went in full effect as Emily’s vocal range soared above anyone’s expectations, I knew this band has something different about them. They put on one hell of a show, and I fully encourage anyone to check this band out.   END_OF_DOCUMENT_TOKEN_TO_BE_REPLACED

Thrice Farewell Tour with Animals As Leaders and o’brother 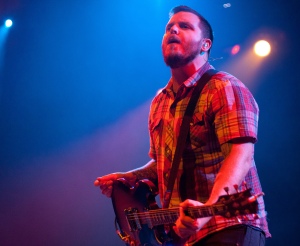 Since May 4th, post-hardcore legends Thrice have been on a nationwide farewell tour. Supporting them on this tour are Animals as Leaders and o’brother. On May 16th, their farewell tour rolled through Orlando’s House of Blues.

The night began with indie-post rock band o’brother. Over the past two years, o’brother has become one of my favorite touring bands. Their 30-minute set on this tour is equal parts loud and haunting, and their songs are complex, but subtly catchy. Their show included several songs from their new album, “Garden Window”.
Following o’bro was Animals as Leaders. Their unique style of instrumental rock is very interesting, to say the least. If you haven’t heard of AAL, they are comprised of one drummer and two guitar players, both of whom play 8-string, detuned guitars. Their lights show is very dark, but projected visualizations of their music flash on the stage.  END_OF_DOCUMENT_TOKEN_TO_BE_REPLACED