The once in a lifetime Guns N Roses “Up Close And Personal Tour” pulled into the Orlando House of Blues last week, and they did so with a bang! The sold out show was only announced the week before, but it was 100% packed to the walls. While the band did start an hour and a half late, the crowd was still just as excited. At their previous show last year at Orlando’s Amway Center, pyrotechnics and a massive stage set took the focus, but at the House Of Blues, it was all about the music. The band took to the stage and belted out their new song Chinese Democracy, then moved right into Welcome To The Jungle. In total, the band played 31 songs over an impressive 3 hour set; the fans didn’t even walk out the door until almost 4am! Highlights of the night were definitely the multiple covers, including Paul McCartney, The Who, Bob Dylan, and Pink Floyd.  One of my personal favorite parts of the night was Axl Rose by himself on the piano, singing a medley of Elton John covers. Ending the night with fan favorites Sweet Child O Mine and Paradise City, Axl hinted that they would be back soon, before disappearing backstage. The fans still continued to cheer and talk about how awesome the show was long after the lights came on. This kind of stripped down tour was a brilliant move on GNR’s part, hopefully they continue this tradition on a regular basis for the fans sake! 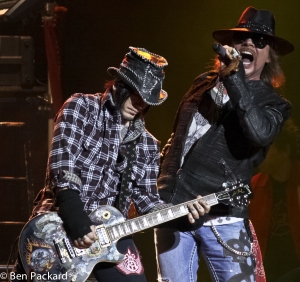