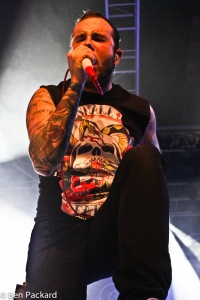 August Burns Red are currently tearing up the US on a major headline tour along side Silverstein, Texas In July, and Letlive. At a recent stop in Orlando at the House Of Blues, ABR brought the mosh to a sold out crowd! Atop 5 large ego risers and bathed by strobe lights and a heavy fog, the band kicked off their set with “Empire,” then continued to play 15 songs, wreaking havoc on the fans going crazy in the pit. The set seemed to feature guest vocals from the lead singers of every opening band on the tour. Highlights included a crazy drum solo during leveler, and Jake Luhrs throwing the mic into the crowd on more than one occasion for the fans to sing with him. ABR ended the night with “composure,” leaving the crowd screaming for more. The band hinted that they would be back very soon, so look forward to a busy 2012 from August Burns Red!

Check Out An Exclusive Photo Gallery From This Show By CLICKING HERE !!!