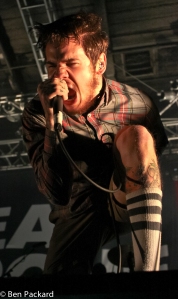 The Devil Wears Prada is currently on the road in support of their new album “The Dead Throne” on the properly named “Dead Throne Tour!” The hardcore sextet are selling out every venue on this run, causing madness in the pit by the time they took to the stage.  Not to be repetitive again, but the band started their set with what else but “Dead Throne.” From there on out, it was an all out mosh fest. TDWP played an unheard of 17 songs much to the delight of the crowd. Surprisingly, they played a lot more old songs than new ones, including Sassafras, Hey John, and HTML Rulez D00d. Mike was his usual madman self, running all over the stage and jumping off of anything and everything he could. He even picked up the guitar for a song exposing his wide range of talents. The band had an impressive stage set, with ramps, risers, and a giant dead throne logo that lit up and changed colors. Ending the night with Danger: Wildman, Mike flung himself into the crowd and surfed his way all the way to the back of he crowd. The wild antics of TDWP never stop, and you would be crazy to miss them live!

Check Out Our Exclusive Photo Gallery From The Dead Throne Tour By Clicking HERE !!