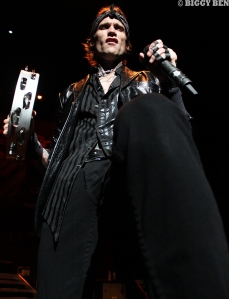 After a run opening up for Guns N Roses, and a stint on the annual Shiprocked cruise, Buckcherry played a one off show with Hinder and Mr Bella in Tampa Florida.  Decked out in their signature glam rock leather attire, the band blasted through a set list filled with fan favorites. Kicking off the night with Tired Of You, Rescue Me, and All Night Long, BC set the mood for the hour and a half that followed. They were out to prove that fans could still rock out even though they were in a Broadway theatre, and that is just what they did! The crowd of 1000 jumped over seats and formed a giant mob in front of the stage, rocking out and singing along to all 17 songs that night. Many fans were surprised that they played their mega hit Crazy Bitch early in the set, but that didn’t stop them from screaming along every word! BC ended the night with Crushed, and kept the fans wanting more. With a very busy 2011 wrapping up for them, one can only hope they will be on the road just as much in 2012!

Check Out Our Exclusive Photo Gallery From This Concert By Clicking HERE !!