3 Doors Down with Theory Of A Deadman and Pop Evil 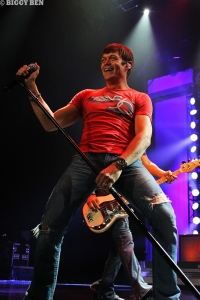 After touring nonstop around the world, 3 Doors Down is finally home in the US, and recently kicked off their “Time Of My Life World Tour.” Bringing along Pop Evil and Theory of a Deadman, fans were in for a treat at their recent show in Orlando Florida. Pop Evil kicked of the night with energy usually only seen by headlining bands. The band members were all over the stage, in your face from start to finish. Front man Leigh Kakaty regularly took to the acoustic guitar to give a totally new dynamic to the set. Be sure to check out Pop Evil if they swing through your area. Theory of a Deadman played a rather bland set. They seemed to just being going through the motions. At one point in the set, Tyler Connolly asked a question to the crowd while his back was turned, and then deliberately commented on the “amount of hands in the air” without even bothering to look and see how many there actually were. After turning around, he knew he was caught essentially “reading a script.”  Just a strange and disheartening thing to see from someone that people paid good money to see. I guess jumping right on this tour after a full headline run on the Carnival of Madness Tour, the guys were just tired. 3 Doors Down finally hit the stage after a very long set change. The crowd could not have been happier. With a massive stage to run around on, the guys were a blur of motion, jumping on speakers and jumping off their drum riser. Compared to the last time I saw 3DD while they performed at the NHL Allstar Game, the energy level was totally different. 3 Doors played a no nonsense set, spending very little time talking in between sets, concentrating mainly on the music, and the crowd ate it up. After years and years of touring, 3 Doors Down has still got it, here’s to hoping they are around for many many more.

Posted on October 11, 2011, in Reviews and tagged 3 Doors Down, Hard Rock Live, Orlando Florida, Pop Evil, theory of a deadman, Time Of My Life World Tour. Bookmark the permalink. Leave a comment.