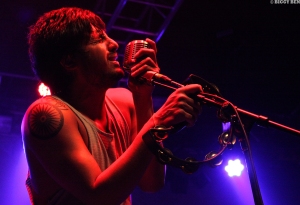 Young the Giant took a day off their current tour with Incubus to play a sold out headline show at the Beacham in Orlando. Along with The Postelles who opened the show, Young The Giant came out with a bang, giving the fans what they had been waiting all night for! Starting off with “Apartment”, YTG kicked off their in your face show with a range of musical talent most bands can only dream about. They played 11 songs covering their whole self-titled album, including fan favorites Guns Out, 12 Fingers, and Islands.  Sameer Gadhia’s vocals were on point, switching back and forth between mic’s to give Giant’s signature sound.  The crowd was off their feet singing along the entire set. For such a young (no pun intended) band as Giant, their rabid fan base is hard to ignore. Ending the show with their megahit “My Body” Gadhia took to the crowd just like their recent VMA performance. With the musical talent that this band has, I cannot wait to see what they have in store for the rest of this year and beyond. You would be a fool not to check out this band when you have the chance.

Posted on October 8, 2011, in Reviews and tagged Incubus, Orlando Florida, The Beacham, VMAs, Young The Giant. Bookmark the permalink. Leave a comment.