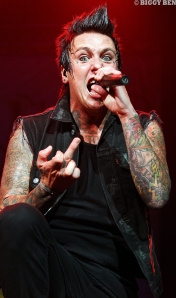 The inaugural Rock Allegiance Tour set off on a trek across the country this past summer, leaving a path of musical destruction everywhere it went. With Headliners Papa Roach and Buckcherry, along with a slew of support acts including Puddle Of Mudd, POD, RED, Crossfade, and Drive A, fans couldn’t go wrong with this tour!At their stop in Winston Salem NC, a rather bland Drive A started off the show, without much crowd support. The lack of energy went both ways, as the band didn’t seem to get too much out of being onstage. Next up was Crossfade, who surprised me the most that night. Their music is incredible live. They have so much energy onstage, and you can see the emotion while they play. They are a new personal favorite for sure. RED was on next, putting on a solid hard rock show. I have heard a lot of buzz about this band in years past, but I never had the chance to see them live, a big mistake on my part! RED are an insane band to see live. Their music is catchy, and they never stop interacting with the crowd. Old-school rap rock band POD was an odd choice of bands to have on this tour, but they never disappointed.  With one of the mot high-energy sets of the show, vocalist Sonny Sandoval walked on stage, then jumped right off and into the crowd, all before they started to play a single song. Puddle of Mudd brought a more somber and relaxed vibe as a midpoint of the tour, but still rocked just as hard as the rest of the bands. Wes Scantlin seemed a little out of it, (nothing new for the front man) but sill put on a great show. Buckcherry was up next, proving you can never be too old to wear skinny leather pants, platform shoes, and trench coats. They rattled off an hour-long set that the crowd had been waiting for. Ending their set giving a ten-minute definition of that they consider a “crazy bitch,” the band jumped into their super hit, and the crowd went nuts. Closing out the night was Papa Roach, and they did so with a bang! With guitars blaring, they took to the stage in a storm of rock. Jacoby Shaddix was all over the stage belting out hit after hit. They covered all of the fan favorites, including Scars and many more. For a tour with little production design, no pyro, and an extended lineup, the bands managed to get the fans just as exited as any other concert I have seen. Here’s to hoping the tour comes back for another round in 2012.