← SICK PUPPIES Live at the House of Blues Cleveland CD Review
Transformers: Dark of the Moon – The Album CD Review →

The Journeys Backyard BBQ tour brought one of its few stops of the year to Charlotte this past Saturday, setting up shop in the Concord Mills Mall parking lot. Combining some of the hottest names in rock with the biggest action sports stars of today, the Backyard BBQ is a festival unlike any other. Not even the rain could stop hundreds of people from coming out for this extreme party. 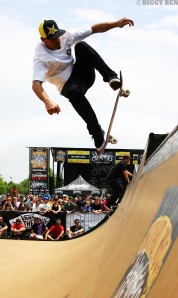 With a long list of sponsors such as Vitamin Water, Skullcandy, and Seventeen, the free stuff was flowing nonstop. On this stop of the tour, Journeys brought out the Vans skate team, along with superstars such as Tony Alva and Cory “Nasty” Nastazio to entertain the crowd with their high flying daredevil moves. Skate superstar Bucky Lasek was supposed to be in Charlotte as well, but he had broken his ankle earlier in the week and was not able to make it. Along with the skate and BMX teams, the Metal Mulisha was out in full force, with riders Derek Garland, Wes Agee, and Jimmy Hill flying over the crowd on their FMX bikes. 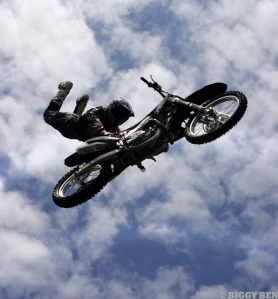 They were throwing down trick after amazing trick making sure all eyes were on them. The best thing about having all of these action sports teams at the same event is the fact that there are multiple demos throughout the day, making sure everyone has a chance to catch a show. 3 local bands are chosen to perform at each tour stop through the Converse battle of the bands.

The fans can vote via text message during the day, with a winner being crowned before the festival is over. This tour stop featured Good Day Reflection, Carson, and the Local Traumatic, who all put on great shows. It’s nice to see an emergence of female fronted local bands, and it’s awesome to see Journeys supporting them. Charlotte locals Paper Tongues were scheduled to play, but do to emergency throat surgery, they were not able to make it. Instead, Laurinburg NC natives Divided by Friday, who were just signed to Hopeless Records stepped up to fill in. Half way through their set, a thunderstorm rolled in, literally forcing Divided By Friday to stop in the middle of a song. The crowd was ushered into the mall for their safety, but a group of a hundred or so remained up against the barricade, cheering to let them play. After the band killed some time throwing out free stuff, the rain disappeared, and they launched back into their set. While the rain may have cancelled the last Metal Mulisha demo of the day, the fans weren’t too disappointed, as that meant they got to see headliners Thursday play early. 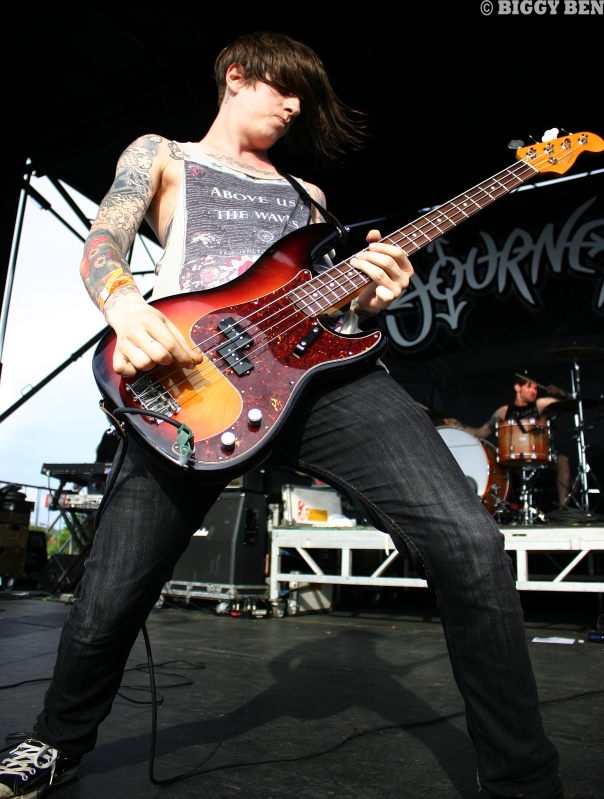 In support of their new album No Devolución which came out last month, Thursday took to the stage just as the bright sun came back out. The punk hardcore rockers played a 45 minute set that the fans ate up. After a long day for everyone, Thursday managed to get the crowd off their feet and singing along. In this current world where everything has a catch and concert ticket prices are through the roof, it’s refreshing to see that Journey’s still cares enough about their customers to put on a totally free, no strings attached festival. Even with the bad weather and cancellations from athletes and bands, the team behind the Journeys Backyard BBQ managed to put on one of the best music and action sports festivals I have ever seen. Here’s to hoping they come back to Charlotte next year!

** For an exclusive photo gallery from the Journeys Backyard BBQ, click HERE **

Posted on August 31, 2011, in Reviews. Bookmark the permalink. Leave a comment.

← SICK PUPPIES Live at the House of Blues Cleveland CD Review
Transformers: Dark of the Moon – The Album CD Review →