In support of their just-released 7th album, Invented, alternative pop-punksters, Jimmy Eat World, are back on the road! Blazing the trail for many alt-rock and pop-punk bands in existence today, Jimmy Eat World are the pioneers of this genre!  After 6 albums and 16 years of making music, Jimmy Eat World shows no signs of packing it in! Making music is what it’s all about, and that’s exactly what Jim Adkins (vocals/ guitar), Rick Burch (bass/ backing vocals), Zach Lind (drums/percussion), and Tom Linton (guitar/ vocals) are still doing! 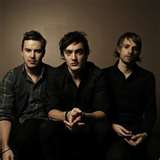 Now on to the show! The opening act was a South African trio called Civil Twilight. Let me say that this was one of the best live bands I’ve seen in a while…and I see a lot of live shows! I had never heard of the band, but quickly was sucked in by their absolute command of their instruments and amazing vocal performances! This trio is TIGHT! Incredibly full sound…beautiful melodies…mesmerizing vocals…off-the-hook musicianship…this band won the hearts of everyone in the room! Along the vein of Muse, OneRepublic, Silversun Pickups, Snow Patrol, and Carolina Liar, Civil Twilight is a band that won’t stay unknown in the States for long!  I was honestly blown away by this band! The band is comprised of vocalist/bassist/keyboardist/pianist Steven McKellar, guitarist Andrew McKellar, and drummer Richard Wouters.  The band is touring the US in support of their self-titled debut album. Their first single is entitled “Teardrop” but their second “Letters From the Sky” is getting quite a lot of attention on itunes and myspace.com. Like I said, this band is INCREDIBLE!  Civil Twilight played about a 45 minutes set. Every note was delivered with the fervor and emotion with which it was written. From Steven  McKellar showing his musical talents on 3 instruments and Andrew McKellar playing his guitar with a bow, everyone in the place left there a fan!  The band played an excellent set of tunes from their debut album. I highly recommend that you check out Civil Twilight! Album is available on itunes!

Now on to the headliner! Jimmy Eat World hit the stage to the cheers of their loyal fans! After 3 years without an album of new music, fans were chomping at the bit to see what Jimmy Eat World has in store for them this go ‘round! At the time of this show, the band’s new album, Invented, hadn’t been released yet. The fans in Asheville got a nice little taste of things to come as the band played an incredibly balanced set of old and new, as well as paid homage to 5 of their 6 albums! A live music fan’s wet dream, Jimmy Eat World played a long set of 19 tunes!  The veteran rockers delivered the tunes in a very no-nonsense, get-it-done manner.  Not much chatting, just rocking! 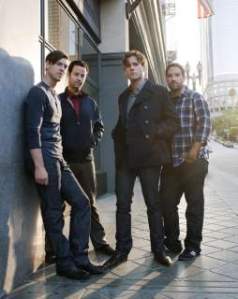 The Arizona-based quartet opened the show with the first single from their new album entitled “My Best Theory.” This tune has been doing quite well on radio, so the crowd was immediately captured! Jimmy Eat World then proceeded to play 18 more tunes from their albums. From Clarity, they played “Goodbye Sky Harbor”, “Your New Aesthetic” and “For Me This is Heaven.” From Jimmy Eat World (Bleed American), they played “Bleed American”, “The Praise Chorus”, “Hear You Me” and of course, “The Middle” and “Sweetness.”  From Futures, we heard “Work”, “Futures”, “23” and “Pain.” From Chase This Light, there was “Big Casino”, “Let It Happen” and “Dizzy.” And from their new album, Invented, we heard “Coffee and Cigarettes”, “Movielike”, “Evidence”, and the aforementioned, “My Best Theory.” The band chose not to play anything from their debut album, Static Prevails. The band showed why they are veterans in this industry! A great live show…great sound…great musicianship…great tunes! A fun, exciting show all around!

Jimmy Eat World will be on tour for the rest of this year, and most probably, the majority of next year too. If you have an opportunity to see them, they are a great live band! Be sure to pick up a copy of Invented, out now! Another awesome album by the veteran pop-punksters!  Check out their tour schedule at www.jimmyeatworld.com.

Civil Twilight is still on tour now too. I highly recommend getting to know this new band! An absolutely amazing live show! Their album is available now too! Definitely check out this one too! You can find upcoming tour dates at www.civiltwilight.com.

All-in-all, a great night of music!

Posted on July 11, 2011, in Reviews and tagged civil twlight, jimmy eat world, the middle. Bookmark the permalink. Leave a comment.