The Road To Bamboozle Tour with Mayday Parade

Mayday Parade is playing Bamboozle this year, one of the biggest music festivals held annually.

While they have to travel from their home state of Florida up to New Jersey, why not make it interesting. Mayday Parade kicked off the “Road to Bamboozle Tour,” playing in states along the east coast while traveling to the festival, as well as dates while traveling home. While these are mostly B markets, it didn’t stop the crowds from flocking to the shows. The tour brought Mayday to Raleigh NC on Wednesday night, and after dealing with some rather boring opening acts (because of the sudden break up of You, Me, and Everyone We Know), 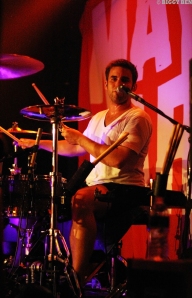 Mayday took the stage to the scream of the fans. Those screams intensified as the boys burst into their mega hit “Jamie All Over.” If you have never seen Mayday Parade live, you have no idea what you are missing! Besides being by far one of the most energetic bands out there, Derek and Jake’s vocals are stunning. While Mayday did play 13 songs, including “Kids In Love,” “3 Cheers For Five Years,” “Black Cat,” “Get Up,” and “Anywhere But Here,” the set felt rather short for the fans the couldn’t get enough. Derek brought out the piano on two occasions, singing “Terrible Things” from their new Valdosta EP, as well as “Miserable At Best.” They ended the night with “Jersey,” which brought on a mass amount of crowd surfers. Mayday Parade is one of the most fan friendly bands out there. They are the only band I know who actually beat the fans out the front door after their set to sign autographs and take pictures with everyone.

Seeing this happen at every one of their shows earns the band more and more respect in my eyes. I can safely say that Mayday Parade is one of the best live bands you will ever see. Their excellent music ability and their genuine love of the fans make Mayday concerts an event you won’t soon forget.