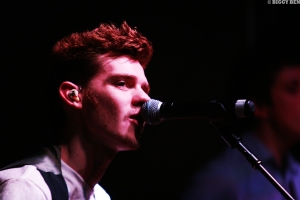 A Rocket to the Moon front man Nick Santino has had a busy few years. From having girls swoon over his hair while his music was still relatively unknown, to currently headlining his own nationwide tour. You would think that this would change his outlook and music style, but that is not the case. ARTTM’s “On Your Side” tour is making its way across the US playing to sold out clubs of screaming fans. With a large opening act roster including Go Radio, Runner Runner, Anarbor, and Valencia, this tour is sure to be one of the biggest hits of the year. At a recent stop in Greensboro NC, it took so long to get the sold out crowd inside the club, that Go Radio had to play 30 minutes early, unfortunately causing a majority of the crowd to miss their set. Newcomers Runner Runner put on a surprisingly good set for a band that has generally not been heard or seen. The crowd really seemed to love them, even singing along with each song. Next up were the green machines themselves, Anarbor. These guys have been touring nonstop for the past 2 years skyrocketing their popularity to new heights. While their love of “all things green” was made clear by the weed t-shirts and under the influence crew members, this did nothing to hinder their performance. Expect to see Anarbor blowing up this year. Valencia was up next and put on arguably the best set of the night. Valencia has been around for many years, playing pop rock music that you can’t help but love. They had more energy while playing than most bands I have seen. Front man Shane Henderson put on a display of true fan love, stopping the set in the middle of the song to call out a violent security guard who viciously put a young fan in a headlock for trying to crowd surf. 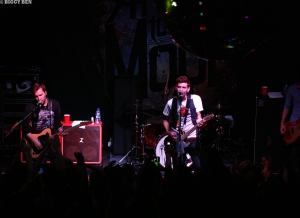 This made me respect the band on a whole new level. I highly recommend you pick up a Valencia CD, I promise it will become one of your favorites. Everyone was waiting for Nick Santino and crew to have their chance to play, and this wish finally came true. The quiet and reserved Santino took to the stage amid the screams of teenage girls. While most bands would play off of this, Nick calmly said hello, before jumping right into the first song. From there on, the band played an hour and 15 minutes of musical magic. Playing hit after hit such as “Give a damn” and “Mr. Right” all the way to “Baby Blue Eyes” and “Dakota”, this set had something for every Rocket fan to love. Santino’s voice was on point; very few artists sound exactly as good live as they do on CD, and he is one of these few exceptions. While the “On Your Side Tour” is only playing to mid level clubs at this point, with Rocket’s rising popularity and Santino’s musical talent, don’t be surprised to find A Rocket To The Moon playing to sold out arenas in a very short time.