Anberlin with 30 Seconds to Mars

Alternative rock band Anberlin is currently touring the country supporting 30 Seconds to Mars on their “Closer to the Edge Tour.” While Anberlin is no stranger to playing bigger venues, at a recent stop at the Raleigh Ampitheatre in Raleigh NC, the band seemed almost as excited to play to such a big crowd as they must have been for their very first time. While they only got to play about 30 minutes of music, the band put on a show that definitely gave the fans their money’s worth. Drenched in Red, Blue, Yellow, and Green lighting from all angles, the band took the stage to the roar of the rain soaked crowd. 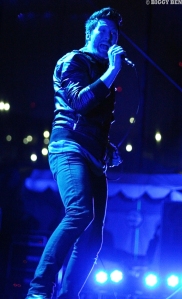 Kicking off the set with “Godspeed,” Anberlin jammed through 9 songs including “Impossible,” “Pray Tell,” “Closer,” and ended the show with “Feel Good Drag.” The set list was heavy on songs from their current album “Dark Is the Way, Light Is A Place.” Vocalist Stephen Christian was a ball of energy, running back and forth across the stage swinging is microphone far out above the crowd. Joseph Milligan’s guitar shredding was on another level; you could not help but stare. Talking with some of the crowd beforehand, many admitted to never hearing of Anberlin before that night. While that seemed to be a large majority of the crowd, what surprised me the most is when at the end of the show, they called for an encore from Anberlin even louder than they did for 30 Seconds to Mars later on that night. I guess that goes to show that the real musical talent doesn’t have to always be the headliner. 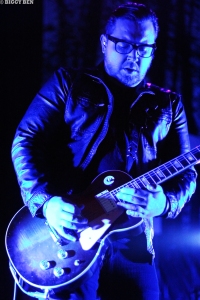