The Revolt Tour with Hollywood Undead 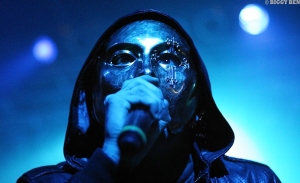 Hollywood Undead is currently headlining the Revolt Tour in support of their newly released album “American Tragedy.” With support from New Medicine, Drive A, and 10 Years, the lineup is sure to excite everyone. New Medicine kicked off the night with arguably the best set of the night. These guys deserved to be direct support to Hollywood Undead on this tour, it’s a shame they were not.

Their musical style and amazing showmanship got the crowd off their feet early and ready for a great night. If the NM guys weren’t onstage, they were on the barricade hawking CD’s or in the crowd introducing themselves to everyone; a class act for sure.

New Medicine will be the next big band, I guarantee it. Up next unfortunately was Drive A… we aren’t even going to go there. Never before have I seen a band so cocky and arrogant that they actually insulted the crowd. No wonder half of them left the room for their set. I have no idea how they even managed to get on a tour like this. 10 Years took the stage next and put on an amazing show. The wildly fan driven set included vocalist Jesse Hasek spending almost the whole set on the barricade or in the crowd.

For a band that I have never heard of before, they put on a very impressive show. Hollywood Undead closed off the night amid screams of their devoted fans. Kicking off their set with fan favorite “Undead,” HU played an hour set consisting of mainly new material. Removing their signature masks half way through the show, Undead continued to keep the fans hanging on their every lyric. With the popularity of their brand new album already growing, expect to see Hollywood Undead around for many years to come.